HOW DOES THE UNICHIP IMPROVE YOUR VEHICLE’S PERFORMANCE?
Modern engine management systems rely on engine sensors to function. The Unichip piggy back ECU intercepts these engine sensor signals, enabling the original engine management system’s settings to be refined and enhanced – even if no other mechanical modifications are carried out. The result is an expertly Unichip tuned engine that reaches its full potential in terms of power, fuel consumption and driveability.

Moreover, the Unichip ECU allows Unichip dealers to fine-tune not only an engine’s fuel and ignition requirements, but a whole host of other performance related functions. This enables owners of modified vehicles to extract the ultimate potential from popular engine upgrades including performance induction systems, camshafts, exhaust manifolds / systems and even turbocharger conversions. Unichip is more than just a ‘chip,’ it’s a multifunctional supplementary ECU that’s capable of being custom ‘live-mapped,’ in exactly the same way as much more expensive ‘stand-alone’ engine management systems.

WHERE DO THESE PERFORMANCE IMPROVEMENTS COME FROM?
When car manufacturers (OEM’s) develop vehicle engine management systems they make compromises to take into account the production and operating variations of the vehicle during its life. Production tolerances mean that no two vehicles are exactly the same; depending on where and how the vehicle’s are used they may experience different climatic conditions, fuel quality, service intervals, driving styles, etc. Taking all of these factors into account results in an OEM engine management system which uses pre-set, homogenised settings (called a ‘map’,) which isn’t necessarily optimised for maximum performance or efficiency, particularly for European driving styles and high quality fuels.

Naturally, OEM engine management system’s maps also cannot take into account any mechanical modifications that owners make to their vehicles. Every mechanical modification, no matter how small, can have a significant effect on the air / fuel ratio and ignition requirements on an engine. In these scenarios the Unichip piggy back ECU is the ideal tool, because it’s designed so that a Unichip dealer can alter these settings way beyond what the OEM map designer ever expected.

HOW DOES THE UNICHIP INCREASE POWER & TORQUE ON A VEHICLE?
Every motor requires optimised ignition, air fuel ratios (and where applicable) boost at all engine RPM points and load conditions. The Unichip gives Unichip dealers the access to, and ability to adjust and optimise both the ignition and fuelling on a car, so that they can precisely control engine performance. With 17 RPM sites between 500 and 8000rpm and 12 load sites between zero and wide open throttle position built into the Unichip’s software, this equates to 204 possible points of adjustment for fuelling alone, with a further 204 for ignition timing.

With the Unichip ‘U-Connect’ plug and play package for diesel vehicles, the Uni-Q piggy back ECU unit arrives having been premapped by Unichip Europe for your specific model year of vehicle. You simply follow the supplied instructions and a few minutes later you can be enjoying the additional performance and efficiency of the Unichip. Then at a later date, if you make mechanical modifications for example, you can visit a Unichip dealer and they can live ‘remap’ the ECU to extract even more performance.

For ‘Dealer Connect,’ applications, the Unichip dealer has to install the Uni-Q unit into the vehicle’s wiring loom, either using the same plug and play system, or by undertaking a simple wiring modification. Once this process is complete, the dealer then fine tunes the Unichip’s map ‘live’ using a chassis dyno (or rolling road) to extract the optimum performance from the vehicle. And remember, the Unichip can store up to five user switchable maps for you - the owner - to exploit.

HOW MUCH EXTRA POWER CAN I EXPECT FROM THE UNICHIP?
Power gains of 8 to 10% are commonplace once a Unichip piggy back ECU is installed, as measured on a rolling road. In rare cases, on turbo petrol cars, gains of 15% have been independently verified. However, the exact power gain depends on the specification and condition of the engine, plus the calibration levels of the OEM engine management system.

No two engines (or rolling roads) are identical, so the results achieved by each Unichip must be regarded as individual. This is particularly true of ‘Dealer Connect’ Unichip installations, where results are verified using ‘before and after’ rolling road testing across the rev range, so that the improvements can be judged objectively.

WILL THE UNICHIP IMPROVE MY CAR’S FUEL ECONOMY?
Yes - in most driving conditions, the Unichip will improve fuel economy. Many modern fuel injected vehicles waste fuel by running very rich air / fuel ratios at part throttle openings. With the Unichip, it is a simple procedure to correctly optimise the air / fuel ratio over 12 throttle positions to maximise fuel economy for cruising and part throttle running.

HISTORY OF THE UNICHIP
The Unichip was invented in 1995 by Automotive Technician, Pieter de Weerdt, as a means by which a skilled tuner could modify a car’s electronics in order to optimise performance. The product available today represents the 25th evolution of this technology and there are about 600 Unichip dealers across 57 countries currently using it as their as the preferred ECU tuning solution. The Unichip Uni-Q is manufactured by Dastek in South Africa, in a state of the art 18,000 sq ft facility staffed by 120 personnel. Dastek's manufacturing environment uses the very latest design and production techniques, including surface mount technology, robotised 'pick and place' machines and dust free electronic assemebly rooms. Unichip is at the forefront of automotive tuning technology and works in conjunction with most of the world's major car manufacturers.﻿ 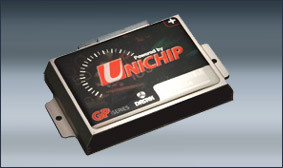 WHAT ARE THE MAIN PARAMETERS THAT THE UNICHIP PIGGY BACK ECU CAN CONTROL?*

The Unichip piggy back ECU allows a car to be LIVE mapped on a rolling road control the following:

IGNITION:
Alter ignition timing in a 3D* map down to 0.1degree resolution.

FUELLING
Alter fuel mixture in a 3D* map by +-50%. If you want to install larger fuel injectors these are easily accommodated and injector scaling is quick and simple.

VALVE TIMING
The Unichip can be used to control variable valve timing on modern VVT engines to increase power output.

INDUCTION
Variable induction systems can be controlled by the Unichip to improve performance.

IDLE SPEED STABILIZATION
The Unichip can control idle speed stabilization, to allow an engine to idle when performance camshafts are fitted.

REV LIMITERS
The Unichip piggy back ECU is designed to allow engine rev limits to be altered on implemented.

WATER INJECTION CONTROL
For high performance turbocharger applications, the Unichip piggy back ECU can control the activation of water or water / methanol injection into the inlet manifold to help reduce detonation at high boost levels.

LAUNCH CONTROL
The Unichip piggy back ECU is capable of running a variety of switchable launch control strategies. Simply select first gear, hold down the clutch, floor the throttle and let the Unichip provide you with the perfect performance getaway.

*A 3D map consists of a table of engine speed versus engine load, plus a value for fuelling or ignition timing at any combination of speed or load. This method is used to map the most advanced stand alone ECU’s on the market accurately and safely, which is why the same functionality is built into the Unichip.

*NOTE: Some of these additional features require the fitment of an additional Dastek interface module.

We can offer you a great special price for a complete inspection!

Find out about up coming events and promos with us!